Inbound 13 – A Box of Rain Will Ease the Pain

-Almost seven years ago, at the age of 40, I picked up my first acoustic guitar at my kids? school auction and began learning to play. It was October, 2006 and the World Series game my beloved St. Louis Cardinals were playing in was rained out. My friend and host invited me over to ?The Garage? where a group of his friends convened every Wednesday night to play music.

The blue collar version of a ?man-cave,? I discovered a loose collection of individuals playing a variety of instruments. A couple of electric guitars here. A businessman on bongo there. A damn good flutist, suffering from MS, but still able to play a mean Jethro Tull. There was a guy on acoustic and one on acoustic bass and a city cop belting out songs by The Eagles with back-up vocals from a Boeing executive.

My friend, having no musical talent at all, resigned himself to pulling the trigger on an electric drill as part of the percussion section. 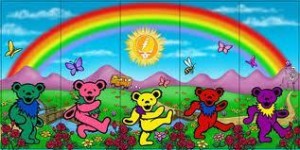 This was as surreal a hootenanny to rival the few Grateful Dead concerts I?ve attended.

The quality of the musicianship ranged from symphonic to awful. But the thing I noticed that first night, and continued to observe at The Garage over the next seven years was this: There was no judgment.

This atmosphere of open-ness and acceptance meant that it was OK to fail; everyone played to the best of their abilities even though it was often less than perfect. This culture fostered an environment of interchangeable learning roles where one minute a player is the teacher and the next he?s a student. People took chances and became better players.

I remember thinking that I?d never even be able to play an ?F? chord.

Now, every Wednesday night, I pack my acoustic guitar, my amp and my HUGE music book, overladen with smoke-scented, beer stained lyrics and dominated by songs from the Dead, Springsteen, Neil Young and the like.

I play. I listen. I commune. And I?m enlightened and inspired. Reminds me of HubSpot?s recent Inbound Conference in Boston, Inbound13.

Here?s a tweet I sent out during Inbound13 with words describing the uncommon themes that ran throughout HubSpot?s keynote speakers, Bold?Talks and workshops:

Now, my skills on the acoustic have improved greatly to the point where I recently invested $3,000 on a Taylor 914-ce Dave Mathews signature acoustic. My favorite song to play, by far, is ?Box of Rain? by the Grateful Dead. Why? It?s dynamic. Those aren?t words that describe any normal conference or convention.

Nope. This is a marketing revolution in its infancy. It?s the equivalent of that first acoustic guitar I bought at the school auction.

Inbound 13: More than a Marketing Conference

The chords aren?t technically difficult to play, but in true Grateful Dead creativity, the sequence and timing are unique. You have to know the song to be able to play it well. And the lyrics? Well, let?s just say they?re magically timeless.

So even if you?re not a Deadhead, here are some quotes from ?Box of Rain? that I believe speak to what HubSpot?s Inbound Marketing initiative and the Inbound Conference experience are all about:

?What do you want me to do, to do for you to see you through?
For this is all a dream we dreamed one afternoon, long ago.?

I see this as Brian and Dharmesh?s vision realized in revolutionizing marketing Best Practices, based on delighting customers.

?Maybe you’ll find direction,
Around some corner where it’s been waiting to meet you.? 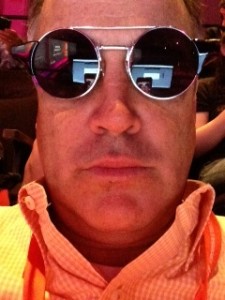 Me believing in the Box of Rain at Inbound 13

Here?s a message to all you HubSpot newbies. It?s all about Inbound.

?Look into any eyes you find by you, you can see clear to another day,
Maybe been seen before, through other eyes on other days while going home.?

?Walk into splintered sunlight,
Inch your way through dead dreams to another land.
Maybe you’re tired and broken,
Your tongue is twisted with words half spoken and thoughts unclear.?

Another message to the traditionalists. Old-school marketing is dead. Gain clarity through the smoky confusion of past marketing tactics by migrating over to the ?good side.?

?A box of rain will ease the pain, and love will see you through.?

Creating ?marketing people love? is the HubSpot mantra. It?s a box of rain.

?Just a box of rain, wind and water
Believe it if you need it, if you don’t, just pass it on??

In Case You Missed It: The Basics of Inbound Marketing

In Case You Missed It: Sales and Marketing Alignment
Scroll to top